FP MY 4.S elected MULTIHULL OF THE YEAR 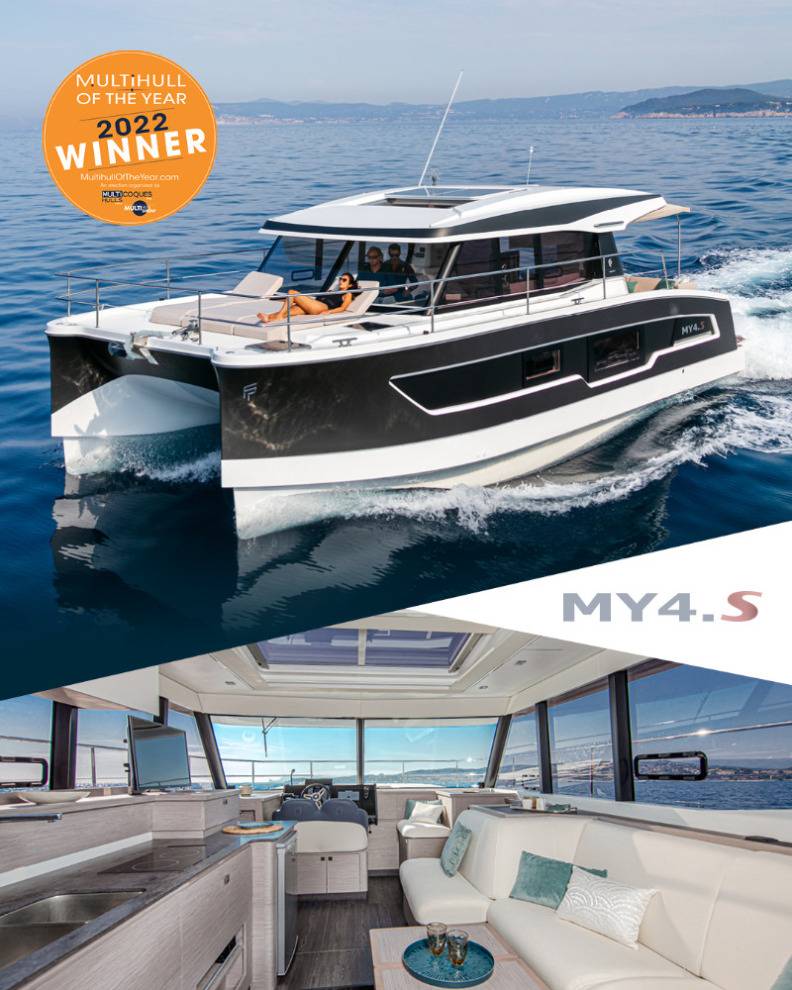 We are glad to announce that Fountaine Pajot MY 4.S power catamaran was elected MULTIHULL OF THE YEAR by a worldwide multihull lovers public, in the Under 40 feet motor multihulls category.

Winner Multihull of the Year - Under 40’ Sail category

MARLIN 33
In this category, where four trimarans were competing, it was the all-carbon model built in Denmark that won by a wide margin, with nearly half the votes.

LEOPARD 42
Three cruising catamarans and one trimaran competed in this section, and South African builder Robertson & Caine took the top spot with 37% of the votes - the Seawind 1370 came in second with 24% of the votes.

RAPIDO 50
Victory for this fast and folding trimaran built in Vietnam, came as a real surprise in a category which included models with very distinct personalities. While all the other competitors obtained very similar results, ranging from 17 to 20% of the votes, the Rapido took almost 27% of the votes.

Winner Multihull of the Year - Over 55’ Sail category

OUTREMER 55
Among the five competitors in the largest sailing multihulls category, it was the Outremer that got everyone in agreement, taking almost 30% of the votes, quite some way ahead of the second-placed Lagoon 55 which received 20.85% of the votes. A result that was celebrated at home since the manufacturer is actually based at La Grande-Motte!

Winner Multihull of the Year - Under 40’ Power category

MY4.S
Two cruising boats and two opens competed in this category, and it was the cabin versions that topped the poll. The MY4.S, the new Sedan from Fountaine Pajot, won by a narrow margin over the Herley Boats 3400 (33% against 29).

AVENTURA 14
Aventura Catamarans' flagship powercat appears to have made an excellent impression since first being presented at Cannes back in September, taking the top spot in this category with 40% of the votes. The LEEN 56 trimaran came in 2nd place, with 24%.

SILENT 60
A clear victory for the Silent 60, the only electric catamaran among the four other nominees, with 29% of the votes, demonstrating that both technology and users are now ready for a different kind of boating. The luxurious long Island 78 Power came second with 17%.